He's got just about the best name possible!

Anyone been watchin "born survivor" on discovery channel? started on channel 4 tonight aswell, tis well good i tell thee.
B

yer he is the man haha ive seen them before on discovery but always worth watchin again. 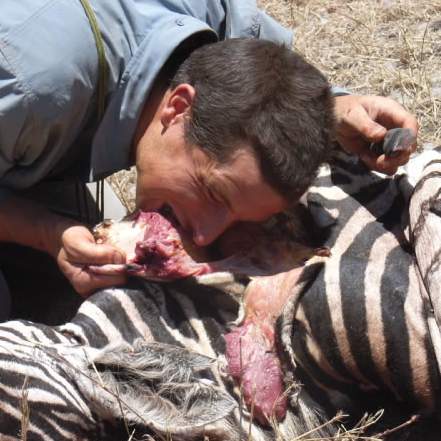 have you seen the one were he squeezes the s*text deleted** thats ruff that.

Yeah, jus to get some water *text deleted*.. really dunno why he does some of the stuff he does but its funny watchin him do it
A

His name comes from his Christianed name Edward and so he was called Teddy which later became Bear. Genius to be honest!

He squeezed the $hit again tonight.. but this time he crawled inside the dead body to pull it out to drink..

I was suprised to learn that he only spent three years in the TA, although it was the SAS R (he had to leave after he broke his back in a parachuting accident) I always presumed he must have served much longer.

Top bloke, his shows are always a good watch.
J

hes funny, but it isnt like hes actually in the wilderness though :p

He is still in the wilderness, although he has been slated for being closer to civilisation than suggested as well as staying in a hotel while filming.

At the end of the day it is only a TV show and is designed to show people some of the skills they would need if they were in the real life situation not to be a true simulation.

He certainly does suffer during filming and is very often in a fair bit of danger. He does a lot of free climbing where one wrong move can be fatal.

I certainly would love to get paid to do what he does.
M

yea i think that the people mouthing off seem to think he is faking because he is taking nessicary precations, saying its "staged".... of course it bloody is! its SHOWING you what to do in life threatining suituations, the fact that he has a flim crew there and its on tv should make that fact perfectly obvious....just a few idiots mouthing off. and what is the point in roughing it in the wilderness when off camera?....there isnt...the whole point is its a TV PROGRAM *text deleted*
P

I think worst thing about the people mouthing off is that they will have never done anything similar.

Do they not think jumping in a frozen lake is bloody cold whether it is for tv or not? I mean bugs will still taste gross, sleeping inside a camel will still stink, the heat is still exhausting etc....
M

exactly....what do the expect exactly for him to be genuine? just walk around the desert with a camera pointing at him and just see if he happens to stumble across a life threatening situation or two!? and then have the crew not help him if he is in one? get real. all it is that started it off is some fat *text deleted* armchair pundit who hasnt got a clue and is obviously a complete idiot. and then....of course you can always rely on some stupid civvys who havent got a clue to jump on the bandwagon. id be *text deleted* liverd if i was him, i have mucho respect for the man.
T

Eating that camel spider though... NASTYY, I think i'd rather die if I was there *text deleted*.
M

Eating that camel spider though... NASTYY, I think i'd rather die if I was there *text deleted*.
Click to expand...

i was *text deleted**text deleted*in releived! i thought those things were proper huge! was more scared of them than the taliban.
A

pcampbell87 said:
I was suprised to learn that he only spent three years in the TA, although it was the SAS R (he had to leave after he broke his back in a parachuting accident) I always presumed he must have served much longer.
Click to expand...

Okay just a basic rule of thumb, When Bear joined the SAS you had be atleast 23 and have 5 years combat experiance, presuming you join up when you're 18 you should get in at the first available choose should you pass selection. You don't just join the SAS honky dory, wether it's the 21, 22 or 23 you still needed the minimum 5 years combat experiance, therefore he's probably been in the army a total of 8 years of which 3 were in 21 SAS.

Edit: I think that the SAS won't consider you untill you've seved a minimum of 3 years and it takes 2 years to become a fully trained soldier and 5 years is more ideal if you want a faster entry.
P

To be honest i had not really looked into it that much, just remember seeing on his website.

I dont care wether he actually survies in the wilderness or not, he does some crazy stuff nd thats all that matters. i know i wouldnt swim under a frozen lake for a television promgramme!

any1 see the Bear Grylls program where his mate made them ''everest machines'' ??
was so hardcore :P
shame is mate's *text deleted**text deleted*ed up tho